Symbolic computation is the sub-area of mathematics and computer science which solves problems on symbolic objects representable on a computer. Typical examples of such objects are

The problem solutions are integrated in many advanced software systems for computer algebra, computer aided design and manufacturing, computer supported reasoning, knowledge management, and formal system specification and verification. Besides playing a fundamental role within mathematics itself, symbolic computation is thus a key technology in many scientific and technical areas today.

More than any other area, symbolic computation depends on the integration of the 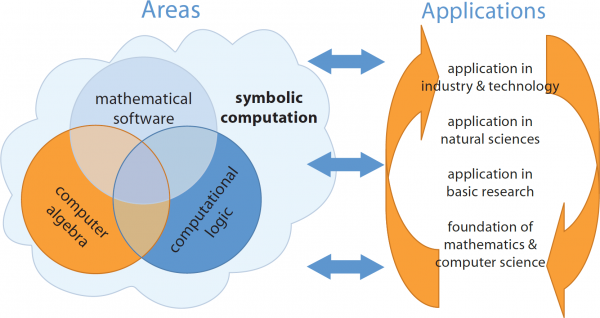 It is a main objective of the symbolic computation curriculum at RISC to unite these three aspects. Graduates of this program are not only experts in symbolic computation but, due to their work in highly abstract models with the goal to develop effective software solutions, also professionals in developing innovative computer-based solutions for challenging problems arising in theoretical investigations and real-world applications. Therefore they are highly qualified to find their place in research and development, in academia and industry.

Within the realm of symbolic computation, research at RISC mainly falls into three general categories: 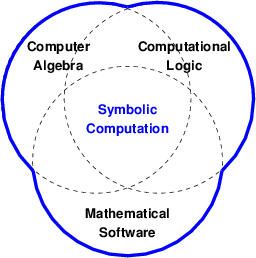 Computer Algebra
We design and implement algorithms that operate on algebraic expressions; typical application areas are e.g. (algebraic) geometry and (algorithmic) combinatorics.
Computational Logic
We work on the specification, management, and derivation of knowledge expressed in the language of symbolic logic (resulting in software systems for supporting mathematical proving) and on the theory of computation.
Mathematical Software
We develop various symbolic computation software such as it occurs in computer algebra systems and theorem provers and study the logical foundations of software for the purpose of formal system specification and verification.

These categories (which present different views to the same field with strong overlappings and interrelationships) are also reflected in the RISC curriculum. See this list of applications for sample outcomes of this research.

Curriculum Courses
These are the core courses of the curriculum; every Ph.D. student performs course work in the amount of at least 30 ECTS points. The curriculum courses are offered annually or biennially; additionally Special Topics courses with varying content may be offered.
Seminars
In seminars, the RISC faculty discusses the state of the art in research and ongoing project work. In the first year, every Ph.D. student attends (as a listener) several seminars; later the student attends (as an active participant) at least one seminar per semester. Seminar topics vary from semester to semester, the ones listed below are just examples.
Standard Courses
These are courses offered by RISC for bachelor/master students in mathematics or computer science. They are actually not part of the RISC curriculum but they may help in exceptional cases to supplement the education of new Ph.D. students.

According to the general working areas of RISC, the courses are structured into three categories. Short course descriptions are given in the appendix.

In the following, we give short descriptions of the courses of the RISC curriculum.

Programming Project Symbolic Computation 1+2: ECTS 6, annually.
In this programming project, the overall process of the team-oriented development of non-trivial mathematical software using modern development tools is exercised.
Design and Analysis of Algorithms: ECTS 3, biennially.
In this course algorithms are presented for specific problems in various areas of mathematics like sorting, graph theory, pattern matching and arithmetic. It also includes the discussion of general principles of algorithm design like `Divide and Conquer’ or dynamic programming, as well as techniques for analyzing the complexity of algorithms.
Introduction to Parallel and Distributed Computing: ECTS 3, biennially.
This course gives an introduction to programming parallel and distributed computer systems. We give an overview on parallel computer architectures, discuss the principles of engineering parallel software, and program simple examples in various programming models, e.g. SPMD (single program, multiple data) programming with automatically parallelizing compilers and message passing programming in the MPI (message programming interface) standard.
Logic Programming: ECTS 3, annually.
Logic programming paradigm has its roots in deduction, and combines it with the computation of values. This course gives an introduction to logic programming, mainly through the Prolog programming language.
Functional Programming: ECTS 3, annually.
The course is an introduction to functional programming and to the Lisp programming language. The course covers the basic principles of functional programming (recursive definition of data structures and program construction using recursion, tail-recursion and its relation to iterative programs), as well as the main constructs of the Lisp language (constructing and accessing lists, conditional and iterative programming constructs, use of Lisp for symbolic computation).
Programming in Mathematica: ECTS 3, annually.
This course illustrates the programming language of the well-known symbolic computation system Mathematica. The course is targeted towards students with a strong mathematical background and the exercises always have a mathematical flavor. We concentrate on features of the language, which make programming in Mathematica different from standard procedural programming as taught in the introductory programming courses for students of Mathematics, thus we emphasize pattern matching, rule-based programming style, functional programming style, and graphics programming
Chess Programming: ECTS 3, biennially.
In the theoretical part varous tasks are considered which can be done by a computer: playing chess, analyzing and assessing positions, solving chess problems and creating endgame tablebases. The principles involved are partially valid for other games as well. Algorithms are described in an abstract fashion. In the practical part a simple chess-playing program is developed.
Computer Algebra Systems: ECTS 3, biennially.
Computer algebra systems are nowadays routinely used in mathematics, science, and engineering for elaborating and solving problems involving symbolic calculations, such as the exact solution of polynomial equations, of indefinite integrals, of sums and recurrences, and much more. Prominent examples of such software are the commercial systems Maple and Mathematica and the open source systems Axiom, GAP, and Maxima. This course trains the practical use of such systems by a number of application examples.
Automated Reasoning Systems: ECTS 3, biennially.
Today there exist a number of tools that support formal reasoning in mathematics and computer science, from simple proof checkers to interactive proof assistants, fully automatic decision procedures, and comprehensive theorem proving systems. Examples of such systems are Isabelle/HOL, Coq, ACL2, PVS, and last but not least the Theorema system developed at RISC. This course trains the practical use of such systems by a number of application examples.
Computer-based Working Environments: ECTS 1.5, annually.
The GNU/Linux operating system gets nowadays more attention based on its excellent features in security and privacy. Many free and open-source programs are available under GNU/Linux. This course teaches how to get things done in a GNU/Linux system. The course covers topics such as working with desktop environment and working on the command line, including a short introduction to commonly used programs, remote connections, mailing, version control, HTML, OpenPGP, image processing.
Special Topics in Mathematical Software: ECTS 3, on demand.